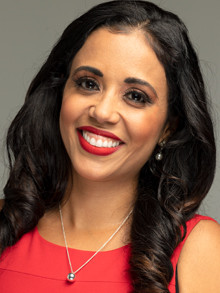 Jackie Orozco co-anchors the weekend morning show of Good Day Columbus on ABC6 News and FOX 28. She enjoys starting her day bright and early to inform Central Ohio. From day one, she made it her mission to not only report the news but be part of the community. She previously served as a mentor for the Latina Mentoring Academy, she’s given speeches at local high schools to motivate students to pursue a college career, she has volunteered for Dress for Success, among other things.

Before joining the team, Jackie worked with FOX35 in Orlando. While in Florida, she covered a variety of stories with national impact including Hurricanes Matthew and Irma, as well as the second annual Invictus Games. Jackie’s work in the Sunshine State earned her an Emmy nomination in best team coverage.

Jackie also worked at the ABC affiliate in Memphis where she was deeply involved with the community. In Memphis, she promoted Hispanic cultural awareness and was a part of the Memphis Latino Leadership organization. She enjoys volunteering her time to speak at schools about the importance of higher education. In fact, she served as the mistress of ceremonies for the annual gala event for the Hispanic Association of Colleges and Universities.

Early in her career, she served as an anchor/reporter in Boise, Idaho. There, she earned an award from the Idaho Press Club for her undercover investigation into the struggles of undocumented immigrants trying to make a life in the United States.

She started her broadcast TV career in Austin, Minnesota.

Jackie is a first-generation Mexican-American and is fluent in Spanish. She and her three siblings are the first in their family to attend some of the most prestigious universities in the country, including Harvard, Stanford, the University of Illinois in Urbana-Champaign, and Vanderbilt. Jackie received her Broadcast Journalism degree at the University of Illinois in Urbana-Champaign, Go Illini!

Jackie is a Chicago native but is happy to call Columbus home where she and her husband started her family here. She says after traveling and living across the country for work, being a mother of two is the most fulfilling reward. You can catch her and her family exploring all the great things Central Ohio has to offer, especially the outdoors.